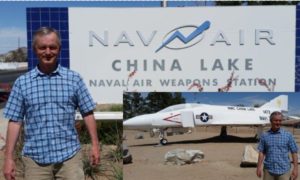 This past spring, I received a LinkedIn message from a stranger asking if I would be interested in delivering a training program on Canadian business culture to the U.S. Navy, in the Mojave Desert. Hmmm. If this was a scam, it was too interesting to let pass by.

Being a Canadian prairie kid, I know a thing or two about where you might and might not find the Navy. Not here, and I am guessing not in the Mojave Desert. Though it turns out – China Lake, California, is home to a major naval air weapons testing facility.

I replied with cautious interest, unlike one of my colleagues who received the same note and immediately dumped it into the trash folder.

After considerable vetting, they decided I was their man. Perhaps, it was my academic record, my many years of intercultural experience, or my desire to one day be a Navy Seal. More likely, I was the only one who responded to the request. Flattered, I accepted the gig.

My mission was to assist US Navy personnel sell weapons of moderate destruction to the Canadian military, and dated ones at that. Apparently, hugely destructive weapons are reserved for themselves and a few select enemies.

I google-earthed the training facility address and saw a steel door, on a windowless wall, at the back of an art studio (I am not kidding here) in a Californian desert town. A perfect cover I thought, and asked my contact if I should show up in a Group of Seven nature disguise

Just prior to meeting participants on training day, a U.S. government official had to explain that it would be unsafe for all concerned if I was to ask any personal questions of the participants or share any personal details of myself. For a training program focussed on personal values, national values, preferred communication, and negotiation styles, I couldn’t see how that would be a problem. “Suppose Howdy Doody emailed Johnny Canuck with an inquiry on a replacement for the Avro Arrow…”

To overcome my fear that I was becoming a traitor to my own country – I explained that the most endearing greeting is to dip one’s hands in maple syrup and touch your fingers to the Canadian’s lips, while at the same time making a hissing sound like bacon sputtering in a pan.

I coached “If one of your weapons system fails the Canadians, sincerely say ‘soooorrry, I’m really soooorrry’, ask yourself ‘what would Tommy Douglas do?’, and quickly arrange for the finest medical attention.”

“Consider renaming your ordinances for greater appeal to the Canadian market, with such fear-invoking monikers as the Beaver Bomber, Loonie Droppings, and Timmies Double Trouble.”

The only benefit of not receiving a military jet return flight from Calgary, was that my wife, who accompanied me for safety reasons, and I were able to take a small detour on the way to LAX to enjoy some fine craft brews and snacks at the scenic Kern River Brewery at the southern tip of Sequoia National Park. Highly recommended.

Joking aside, I found the organizers helpful and professional, the U.S. Navy participants to be curious, thoughtful, open, and engaged. It is refreshing to see the U.S. Navy paying such attention to building respectful and positive relationships. May our two countries always be allies.

Fun and Games at the Movies