In 1971, Estevan, Saskatchewan, I had to navigate around 4 traffic lights and a few dozen cars on the day of my driver’s test. Maneuvering a “bed on wheels”, as a preacher of the day scathingly called the auto, was a fairly simple task. 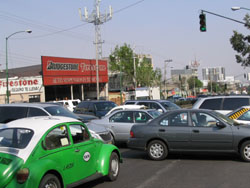 Now I drive in a city with as many people as are in Canada between the Pacific Ocean and the border of Quebec, something over 20 million. While they may not all own cars, it feels like they do.

Perhaps it’s the altitude (2,235 meters) or perhaps it’s the super-charged feet of killer soccer players, but the drivers of Mexico City really move. As I allow a safe distance between mine and the car in front, the space is consumed by an instantly materialized vehicle. I brake and brake again to avoid collision. I learn to keep the distance between my car and the vehicle in front to the size of a small sombrero, whatever our speed.

Mexicans following me think the word on my license plate “Alberta” means “handicapped” in English. I imagine the driver recounting to his wife over dinner about this gringo he was following on the Periferico(freeway), “The poor gringo in front of me had some sort of Alberta. I don’t think he could hear or see me.”

Where there are lane lines painted on the roadway, they are barely wide enough for my mid-sized car. A friend said last year they changed a 3 lane road into a 4 lane road simply by repainting the lines. Unfortunately the cars aren’t getting smaller. More and more fancy new vans and SUVs can be seen filling the roadways. The benefit to me is that they make far better targets for the banditos. Though my license plates clearly mark me as foreigner, I just don’t look worth it to the bad guys in my ’88 Mazda sedan. 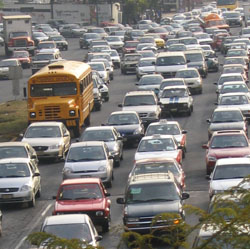 When stopped at a traffic light, you might develop the need for a map, a cleaner window, a snack, a phone card, a bunch of flowers, a live rabbit, a juggler, a garbage can or a guy to roll on broken glass for your entertainment, and it will appear. Street vendors can supply pretty much anything you can imagine and far, far more. New York’s Rudolf Giuliani gave the advice to this city that they should ban the vendors in traffic, as it would cut down on crime. Good luck.

The left turn lane springs from one to two to three lanes of traffic quite spontaneously. The driver in the third lane out from the turn, often a taxi, will chose to make a u-turn rather than a left turn. A horn may be honked but rarely is there the sound of scraping metal and shattering glass.

Naturally, it seems like chaos to the untrained eye. To the experienced, it is fluid, flexible and somehow right for the circumstances. Mexico City drivers are among the most attentive I have ever seen. I had expected to see the roadways littered with the carnage. But they are not, mostly. The unwritten rules take a while to learn. But it becomes clear that drivers are anything but asleep at the wheel. They are noting traffic 2 blocks ahead and taking corrective action, as creative as that may be. More than once I have slowed to practically a stop on a freeway as I pondered which lane I should really be in. Cars weave and sometimes honk but don’t touch me.

The trickiest part for me is how to handle pedestrians. They are pretty much left to depend on their own survival skills. Like most things in life, the first time is the hardest. An old woman and her granddaughter hand-in-hand enter the intersection. I am turning right and across their path. I slow and stop. They look at me like I might be having a brain seizure. Worry and disbelief are written across both their faces. I feet like a criminal and slowly proceed through the intersection just in front of them.

The Mexican who probably best remembers me is the traffic cop I stopped for. During higher traffic hours, that would be between 7 am and 11 pm, it is not uncommon for a traffic officer to assist in the flow of traffic. These guys take their jobs seriously. They exhibit a sophisticated combination of science and art in their traffic control dance.

When you are to go, the cop blows his whistle in short repetitive spurts and waves his arms rapidly in full circular motions. This must take some training, particularly at this altitude. Drivers obey, mostly, and the traffic flows.

In my first few weeks of driving here, when I still took red lights very seriously, I would break on a yellow and stop on a red. I accepted the risk of being rear-ended. One afternoon I came upon a busy intersection with the policeman gesturing what seemed to be for us to continue forward. I was watching the light ahead turn from yellow to red. I was confused. Again, years of traffic light training were causing an overwhelming conflict inside me. Which signal to follow?

With blocks of traffic behind me I slowly came to a stop just before the traffic cop. The whistle stopped shrieking, his hands fell to his sides and his shoulders slumped. The look upon his face as we locked eyes was one of “why me lord?” That, combined with the honking of horns in the rear finally propelled me through the intersection and the red light.

Driving in Mexico City is educational and exhilarating. I recommend it. How the other drivers and traffic cops feel about having me on their roads is another matter.

Don Rutherford is a cross-cultural trainer and consultant. He can be reached at don@culture-connect.com.